As cheesy as this sounds, few books "speak to me" like this book did. It hit so many of the "big" notes with me: animation, tech-process, God-centered thinking in our efforts, what's really important, humor and more.

That being the case, the fact that it's a great book on top of that makes it all the more appealing to me.

Phil Vischer wrote this book after blogging (www.philvischer.com) and publicly speaking on this topic numerous times and being asked to write a book. I can only believe that through those efforts, the story became focused, clear and very well thought out.

He starts off early in making a couple of points that reminded me of parts of his blog I had read: his great-grandfather's riding the tide of radio (much likeVeggieTales' ride on the direct-to-video market) and his father's hot air balloon mishap when he staged a publicity stunt instead of going to church (possibly likePhil's losing focus with VeggieTales' success). Phil doesn't make the connection in the book himself, so I may be off there... or maybe that's a "spoiler."

The book is inspiring to say the least. However, it takes the reader in many directions before the final thoughts that are not only powerful, but ring extremely true. Especially given the journey the author has just taken you on through the books' telling of the "rise and fall of VeggieTales."

The day after reading the book I started reading it again. I wanted to experience it all again! I mostly scanned through much of the book; it still being fresh in my mind. But I slowed down for the last several chapters to soak up his revelations and realizations. So great!

It is a somewhat sad story of struggle and sacrifice but with great success in many ways. Of course, that success ends painfully for many including Phil. The growth in him is clear from the great introspection and clear change of heart.

Rarely will you see a book about such a topic with such honestly, humility and great sharing of heartfelt lessons learned.

I highly recommend this book to anyone who has a ministry... which really is all of us. I think it has a great message about how what we do isn't really the point. I believe God can do whatever He wants however He wants and the fact that He uses us to do many things is more for us than anything else.

He uses us to witness to others not to help Him out, but to grow us. The "work" we do isn't for Him, it's by Him... for us. We need to just be obedient to what He tells us to do. Let Him worry about the results.

There's so many parts of the book about growing VeggieTales and the sacrifices and struggles, then it's height and fall and, very powerfully, the lessons learned byPhil, that I can't think to try to describe it all, but encourage you to read and experience it yourself.

I wanted to separate my thoughts on the book above from my "application" here so you can stop reading if you're just interested in the book.

I created The Booples after a long love of animation and film/video but with no specific direction. A friend mentioned her son repeats all the songs in the videos he watches and I thought "Then the words should be Bible verses."

In my spare time, I created the first three episodes. I specifically only worked on it when I wanted to (and had time) and intentionally resisted it at times to make sure I didn't become too goal oriented to "just get it done." I also intentionally used 2D graphics and avoid to much "flash" in the episodes to focus on content over delivery.

It worked and it took me about a year to finish those three episodes though I'd say they each took me relatively little time if you added it all up.

Since then it seems I've spent most of my time marketing and promoting the DVD/videos and The Booples in general. You can read about various highlights here: Booples news

I started working on songs for the second DVD and while waiting for my music master,Pete Buchwald, to record them I thought I'd work on some stories without songs. I picked Jonah, Noah and David & Goliath.

After several people asked what the song would be like I knew they had to have songs and I talked to Pete about those. Then I started looking at schedules, film festival deadlines, thinking about a Spring release and Summer release of the next three episodes, a Christmas and Easter special DVD, etc.

I certainly was still enjoying doing it, but was putting more pressure on myself.

Then I read this book. It's going to change... it already has. With in a few hours, I had several new ideas for directions, stories, songs, etc. It reminded me of the part of the book where Phil says "Oh... is this how it's going to work now?"

When I started The Booples, I had never seen a VeggieTales episode. I think I heard a song once several years ago and it was funny. I intentionally didn't watch any when starting The Booples because I didn't want to be influenced by them too much.

That being said, I'd very much like to watch some now having read about Phil's journey and expect to borrow some from various friends that I know have some.

I have many more thoughts on the book including many similarities I can identify withPhil on including my parents' divorce, my thoughts on how entertainment has been overtaken by non-believers and Christian's often abdicating it to them, an early fascination and involvement with computers and computer related animation/graphics, and a love of Saturday morning cartoons (Saturday morning did and still has a feeling of a 'weekly holiday' to me - "Cartoon Day" as I called it literally... Thursday, Friday, Cartoonday), etc.

Two things that are hitting me hard today from the book are the C.S. Lewis quote: "He who has God plus many things has nothing more than he who has God alone." Yow. I can't add to that.

And one of his big points near the end. I don't want to quote it and spoil things more than I already have, but the basic idea is it's our responsibility to be obedient, not to make sure the outcome is one thing or another.

Everything is well.
Posted by BMan at 5:21 PM No comments:

The next Booples episode is the story of Jonah and is named "Jonah and the Tarshish Fish." It has been completed and will soon be on SermonSpice.com for downloadable purchase (if you don't see anything from that link, you might need a plug-in - go to here to find out).

I'll try to post a still from the episode soon.

The next episode will be Noah!
Posted by BMan at 6:40 AM No comments: 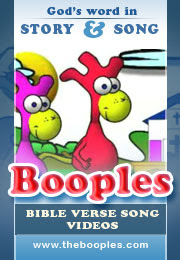